Augmented Reality can be defined as the process where computer graphics are layered on a real world view through a camera controlled by the user. It may recognise an object or image using a visual search or a point of interest (POI) from GPS co-ordinates such as a building to provide contextual information. Although AR can be implemented on a desktop computer, it has a greater association when used on portable devices such as smartphone or tablets. 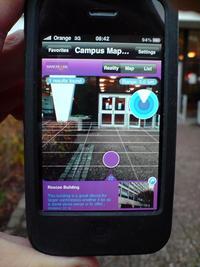 AR was originally developed in the early 90s but the recent advances in technology and proliferation of smart phone have made its use more viable. Early uses of AR were in marketing and advertising but it is increasingly being used in other areas, including education.

On a technical level, there are broadly two categories: Marker-based, and markerless systems.

Marker-based systems or natural feature tracking use physical-world symbols and act as a reference point for computer graphics to be overlaid. So I could take a 2-dimensional printed marker, point my mobile phone at the marker and my phone would interpret this symbol to overlay an on-screen graphic as if it were directly on top of the marker in the physical world.

An alternative approach is use of markerless systems which use location data or GPS to determine the position in the physical world. The location data can them be compared to a database to determine what the device is looking at, and influence what will be displayed on-screen.

Although Augmented Reality has been evangelized for years, there have only been a handful of examples for educational purposes, such as the British Museums’ Ancient Egyptian trail or The Augsburg Display Cabinet AR experience at the John Paul Getty Museum.

Recently, the National Geographic Channel have used an installation to promote educational documentaries on natural history. In a similar way AR was used to showcase interactive elements in the Belgrade Science Festival. The installation consisted of a giant book in which usual school subjects such as history, geography or science were presented with an AR twist.

As part of the SCARLET project, a video was developed showing a typical user journey on an iPad and how surrounding resources could be accessed.

AR first emerged predominantly as a new marketing tool to engage the smartphone generation. A number of products now use some form of AR to encourage the user/potential consumer to interact and learn more about the item. In a number of toys stores worldwide Lego have positioned kiosks that display animated 3D augmented content of the complete models. 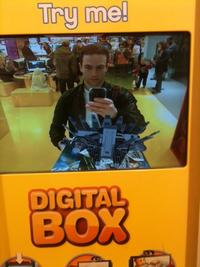 Magazines have also used AR to provide their “readers” with additional content on news items such as videos and promotional 3D models. This recent issue of Heat magazine features an interactive augmented reality treasure hunt.

Advertising has brought Augmented Reality to the masses, gaining much publicity in such marketing campaigns as Lynx, where the public could interact with augmented angels in Euston Station.

Universal Pictures (UK), the leading film studio recently used augmented to bring to life its most famous titles, through a unique range of celebratory Blu-ray and DVD sleeves.

Absolut's augmented reality campaign, AbsolutTruths, shows consumers how vodka is made using an AR tag hung on Absolut bottles.In the Starbucks Cup Magic AR app, users point their smartphone at the cup producing animations involving five characters including an ice skater, a squirrel, a boy and his dog sledding, and a fox.

Net-A-Porter's use of an augmented reality window display can reveal videos of the catwalk, product information, 360 degree product models, pricing and the ability to purchase the products. Atol eyewear uses AR with facial recognition allowing users to virtually try on anything in the collection and see exactly how it looks on and moves with their face.The TryLive application turns augmented reality into a virtual fitting room. Users get a remarkably accurate picture of how apparel will look and fit on them — in real time and in motion on Kinect for the Xbox.

Volkswagen have developed an instructional AR implementation to guide their mechanics when doing vehicle services.

SCARLET Evaluation Nine students at the University of Manchester were selected to research a Dante book from the University’s Special Collections for their first course essay. At the same time they were able to access SCARLET content via iPads in the reading room of the library. This was our first opportunity to discover their thoughts on using SCARLET to support their research.

Thoughts on the ELI Conference The conference (Feb 2012) was a fascinating opportunity to see the innovative developments that are taking place in Teaching and Learning in North America, particularly within the mobile arena.

Rise of the Portable Machines A growing number of consumers are turning away from what they perceive to be a restrictive desktop environment in a bid to be connected 24/7.

Bringing Ancient Greek Papyri to Life through AR SCARLET technologies and resources are designed to improve your observation abilities. This blog post includes a video looking at using the most famous piece of the Rylands collection, the world-renowned oldest fragment of the Gospel of John, as an example. The fragment is an ideal starting point not only because of its importance, but also because it is on permanent public display. See how using AR brings this to life not only with students, but also with the wider audience.

Demystifying the SCARLET app Workflow Guyda Armstrong explains the core materials (Editions) used on her course – Beyond the Text: The Book and its Body and how using Augmented Reality will connect students to supplemental resources and commentaries.

The Benefits of Using Augmented Reality in Education The SCARLET project, while embracing the potential of AR, hopes to concentrate on delivering the benefits to student learning without being a flag bearer for the technology.

Team SCARLET, in the Library with Augmented Reality Team SCARLET (as we like to be known) got to see some original manuscripts and early printed editions that this project aims to merge (using Augmented Reality) with the abundance of digital assets that the University of Manchester are so fortunate to have access to.